Netflix has a new superhero series coming out in 2020, supposedly. Wonder if this will turn out to be anything worthwhile. Article mentions release date in title but then inside article says no release date set (maybe that'll change later on). Anyone familiar with this comic?

theScribbler wrote: ↑10 months ago Anyone familiar with this comic?

Yes, very familiar with the comic. I have several TPBs. I think this is part of a general agreement from Netflix to unfold various properties from the prolific Millarworld-verse (if you're familiar with Kick-Ass, that's one of Mark Millar's earlier successful IPs).

There's already a Wiki page with lots of information, pretty much most things but the actual release date. But the filming commenced in Canada way back in July 2019 so it's probably ready to go by now. Not a lot of big stars in this one - so far, mainly just Josh Duhamel is the draw as The Utopian. Not much to go on visually yet: the only photo widely available on the Net is Duhamel in a white superhero costume looking like "Super-Moses". We have yet to see the hotness level of Grace or Chloe's costumes, so reserve judgement on that.

Jupiter's Legacy is the kind of superior superhero saga that has been coming out which incorporates influences from previous generations and synthesizes them together. Because of the multi-generational approach and a bit of the ol' ultra-violent deconstruction (though not to the level of say, The Boys) you can see the influence of Watchmen....The Union is reminiscent of plenty of super-teams which have some depth and nuance, so while at first you might think "Justice League", dig a little deeper and you might find some aspects of, say, The Authority (Wildstorm), Squadron Supreme (Marvel), Ultraforce (Malibu) and Unity (Valiant)....

And maybe most importantly, the main characters are an entire family of superheroes. This is by no means the only family dynamic which has been done recently, but it's been done probably most consistently in the line of Image superhero titles which came out in the 2000s, such as Noble Causes, Dynamo 5, and most of all, Invincible. And of course, in the Black Lightning TV show, to positive effect. Speaking of which, there's also going to be room for wokeness criticism here: almost all the main characters (being of the same family, of course) are Caucasian, so we'll have to see how that plays out with current year Twitter outrage mobs.

Jupiter's Legacy is pretty strong, and I would say it maybe comes in second or third for new superhero universes created in the 21st century - my personal favorite being Invincible (see my post about the upcoming animated series). Very much looking forward to see what Netflix does with this, and how it will fare in a world that almost has *too many* superhero properties coming out at once.

Mark Millar posted some photos from the Jupiter's Legacy production which debuts on May 7.
Get excited!

The three main adult superheroes: Lady Liberty, The Utopian and Brainwave.
They're old because they've been heroes since the 1930s.
Not sure why they didn't make Lady Liberty's costume as close to the comic as The Utopian's is.
Actress is shapely enough but lacks a bit in the chestal area, she's not as obviously hot as Starlight and Maeve of the Boys.
Meanwhile the dudes really need some codpieces. 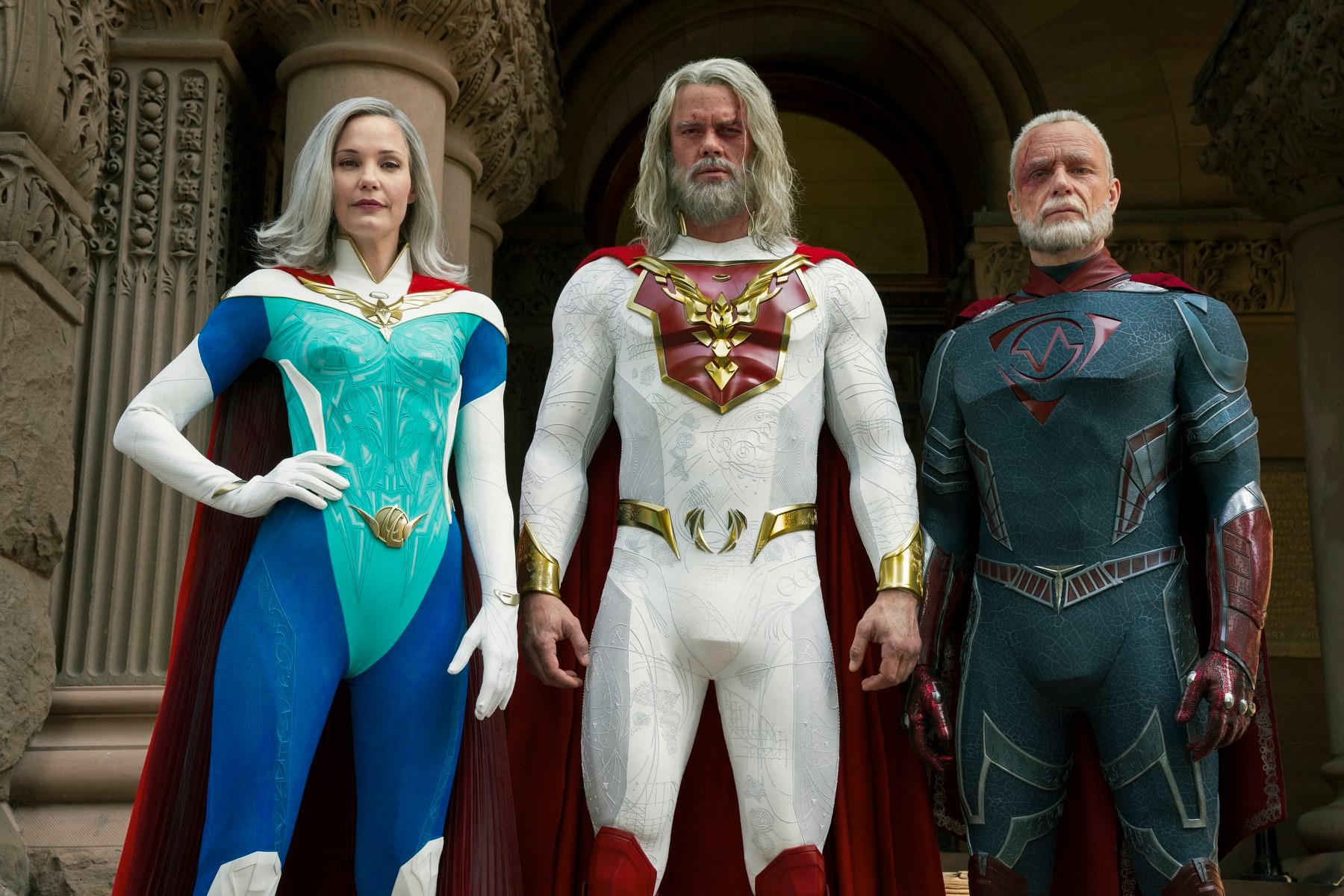 Chloe Sampson, the superpowered daughter of Liberty and Utopian. Not sure if this black outfit will be her costume.
She's probably the brooding goth chick. 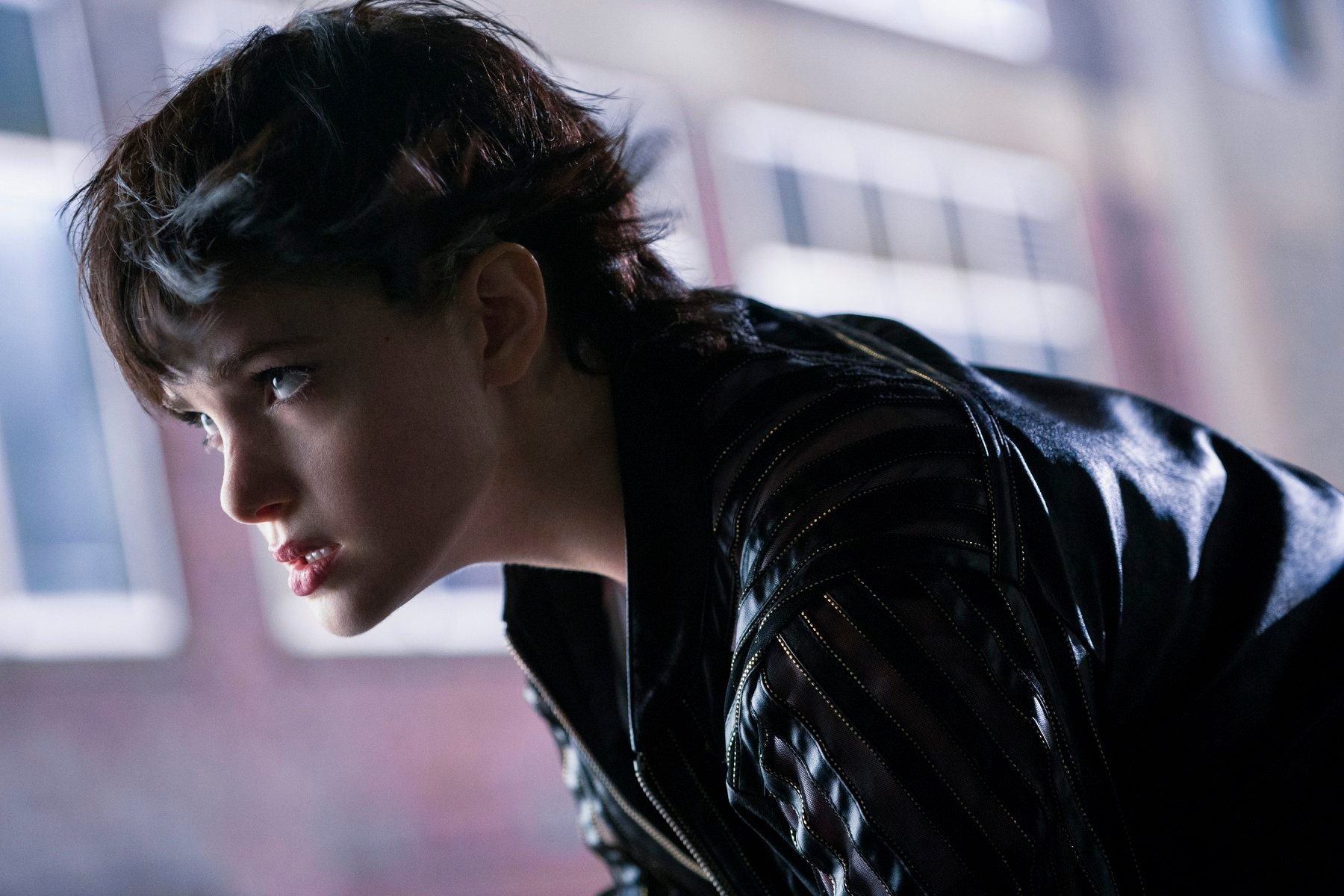 Brandon Sampson, the superpowered son of Liberty and Utopian. He's got a good costume.
Plus a Frank Quitely Easter Egg on the delivery van. 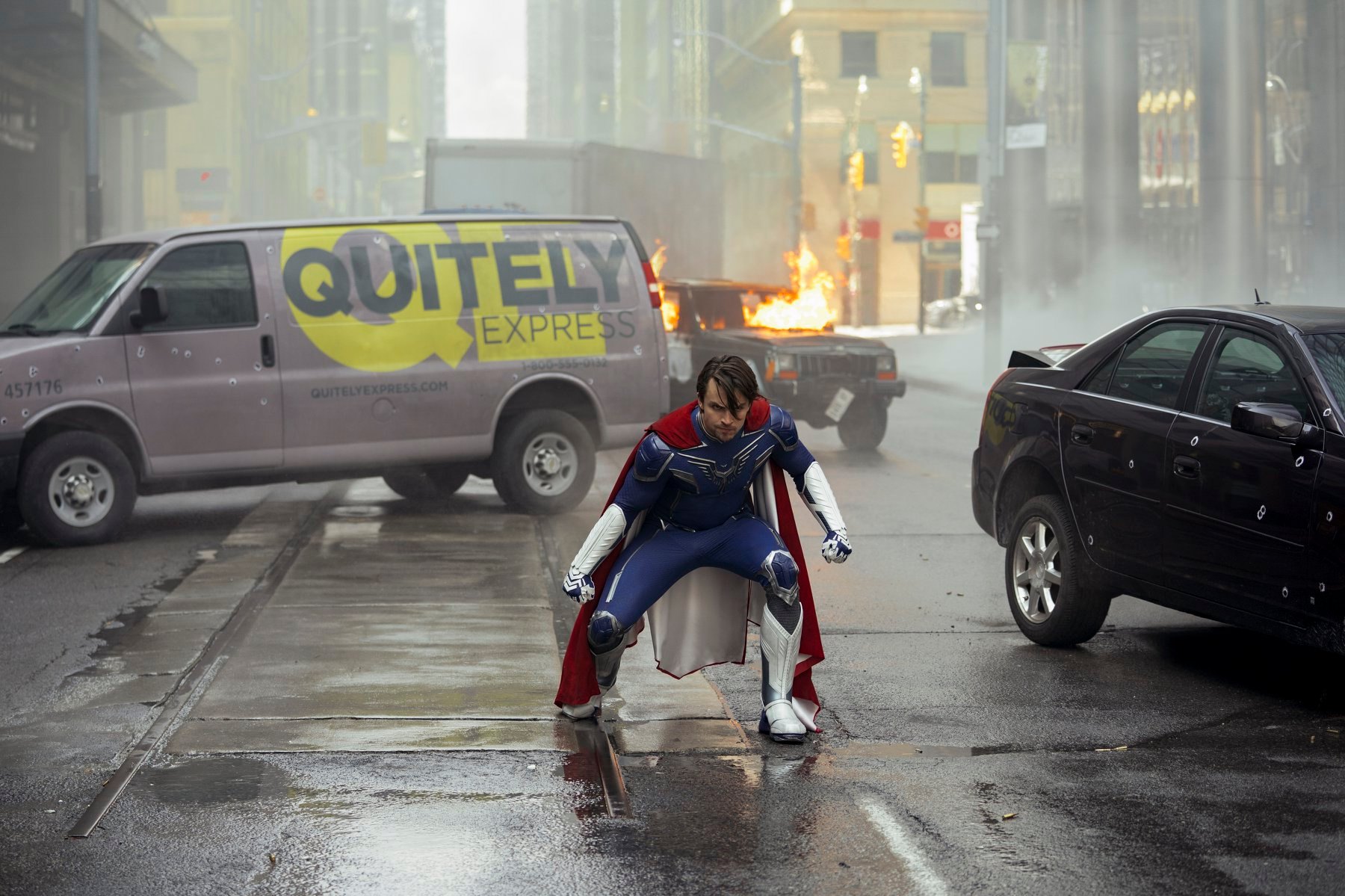 I was at a LCS (which carries our comic) the other day and noticed that they have re-issued the Jupiter's Circle tpbs (as shown above in Scribbler's original post), but re-titled them instead as Jupiter's Legacy. So the third one in the graphic above is now being
marketed as the first book you need to read to start on the series, because it introduces all the characters at their earliest point.

The problem with this earliest point, however, is that it's in 1959 (these heroes have been around since the 1930s, when they all got their powers from a mysterious island). So there's a ton of emphasis on the hero Skyfox, and how he is living a "triple life" with "two secret identities" because he is both a superhero and a surgeon, as well as secretly leading a gay lifestyle in Hollywood circles. This being the 1950s, he has to keep it all on the downlow or he will jeopardize not just his two 'careers' but also the reputation of The Union (their version of Justice League) as a whole. Also, all the superheroes in the comic book smoke cigarettes!

So I wonder if there's going to be this whole retro vibe to the first season of the series where it's set in the late 50s and it's going to look a lot like Mad Men with superheroes. I guess we'll see how that's going to go over with the crowd that's getting used to lots of explosions and ultraviolence. Debuts May 7 on Netflix.

Trailer is beautiful but it doesn't give anything away at all.

the girl with the short black hair looks like she could get kinky....
Top

batgirl1969 wrote: ↑6 days ago the girl with the short black hair looks like she could get kinky....

You say that about all women...
Top

Very impressive trailer. It's going to be the young bucks trying to live up to the standards of the old legacy heroes.
Actress playing Chloe Sampson is very cute. The one playing Lady Liberty (Grace Sampson) looks great, too.

No hint of the gay-superhero-with-three-identities plot (re Skyfox) which was strongly emphasized in the first graphic novel
that was reissued in comic shops to help promote this TV series, although he is featured prominently in this trailer.
It would only be relevant in the 1960s part of the saga. We'll see if it comes up in the first season.