Finally after the wait, a new season!

The first three episodes are a slow burn, re-introducing all the characters and what they've been up to.

One of the biggest life changes is to Chrisjen Avasarala, who has to adjust a huge drop in prestige, from being basically the President of Earth to assignment in a backwater post on the Moon. Everyone else is going through their various adjustments as well, with
the backdrop threat being the planned attack on Earth by Belter terrorist Marco Inaros (which was pre-saged at the end of S4).

You'll probably want to watch these all at once.

Episode 1 is very slow, and basically just getting viewers up to speed. Invites you back into the world.

Episode 2 has something of great interest to members of this forum - a heroine in grave peril!
(Specifically, Monica the reporter - kind of the Lois Lane of the series - who is looking into secret protomolecule research)
First of all, she's tied up, hands and feet, upside down against a wall.
Then she's in a tight outfit, writhing and choking to death of asphyxiation in a shipping container, while trying to improvise a way
out of her lethal predicament. It's almost like a SHIP video could be made out of it - anyone thought of parodying The Expanse yet?

Episode 3 also has some moments of Forum interest. Two actresses really punch above their weight in this episode in varied ways:

1) Cara Gee who plays the tough and gorgeous Camilla Drummer is really good here. There is a brief nude scene where you can pretty much see her whole naked body as she puts on her uniform. The writers here seem to be offering a flip side to her toughened exterior - she shows vulnerability as she asks one of her female crew members to sleep with her. We then get a nice lesbian kissing scene
and the lovers wake up next to each other in a naked embrace. There's no virtue signaling here - just romantic matter-of-factness.

2) Frankie Adams, a Kiwi/Samoan actress with a lovely Antipodean accent, continues to do a great job playing the Martian, Bobbi Draper, and she is built solid like a brick house - you can see her muscles as she lifts weights. Her appeal is more of a solid "girl power" attitude, as she saves her friend (and former lover?) Alex Kamal, bursting into a perilous situation while kicking ass and taking names.

And 3) Dominique Tipper, the actress who plays Naomi Nagata, isn't quite as impressive in a dramatic sense as the other two above, but the character does have an abrupt peril scene: in a turn of events which involves treachery by her estranged son, she is seriously shocked by a taser into unconsciousness, and then cradle-carried by a strong man.

All of these characters are probably heroines to those who are looking for strong female characters in this series...which pretty much every single character is, while still having the necessary flaws required to remain sufficiently complex, and not to descend into one-dimensional predictable Mary Sue-dom.

Episode 3 also contains a ramping-up of the story as Marco Inaros finally makes his move, so this is where the exposition peters off and the season really begins in earnest.

I don't really think I gave much away of the story, so I didn't think spoilers are needed, but if you disagree, I'll be happy to add them.

The Expanse continues to be one of the finest science fiction shows of the 21st century. Even just hearing the theme music gives me the right kind of chills..not the "get ready for a rollicking adventure" kind like when I hear the Mandalorian theme, but more of a "welcome to the deep darkness of space and all of the human frailties which occur within its cold unfeeling grasp" type of chills.

P.S. Maybe this last comment belongs in the separate "comics" section, but...I just bought the very first issue of the first Expanse comic, a four-issue miniseries on Boom! Studios. Unfortunately, it's a different situation than with the Dark Horse comics of The Orville. With The Orville, if the art is maybe a bit stilted and mediocre, at least you get totally original stories set within the Orville universe that don't occur in the TV series, and even some new minor characters too which are unique to the comic.

However, with The Expanse (at least with the #1 issue) I found out that I'm literally reading scenes which (although written slightly longer and differently) are the same ones that I'm seeing in this show (specifically there's a scene with Ashanti and Chrisjen from Episode 2 that's repeated in the comic). Also, even though the cover looks pretty nice, the interior art is rudimentary at best, and doesn't put the appearances of the characters in the best light. So I'm sorry to have to say you probably are going to want to skip The Expanse's first comic book series even if you are a fan of the show. I'll check in on the 2nd issue, however, to see if this disappointing trend continues.
Last edited by shevek 3 months ago, edited 1 time in total.
Website: http://www.heroineburgh.com
Youtube: https://www.youtube.com/channel/UCsaJNs ... h5aTsjnGxQ
Twitter: https://twitter.com/Heroineburgh1
Facebook: https://www.facebook.com/heroineburgh/
DeviantArt: https://www.deviantart.com/heroineburgh
Top 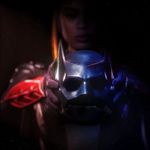 I watched until season 2 I guess....so far.
Thinking about starting to watch again.
Seems like the show is running still pretty good at least.

@Shevek:
As you have seen (seemingly) all the episodes so far:
Are there any scenes with women getting into perilous situation regarding their oxygen supply? (astronauts etc.)
I am asking for a weird friend of mine....

Masked women in action! Superheroines, burglars, villainesses are waiting for you...
Top

Maskripper wrote: ↑3 months ago I watched until season 2 I guess....so far.
Thinking about starting to watch again.
Seems like the show is running still pretty good at least.

@Shevek:
As you have seen (seemingly) all the episodes so far:
Are there any scenes with women getting into perilous situation regarding their oxygen supply? (astronauts etc.)
I am asking for a weird friend of mine....

Sorry, Maskripper, actually I *started* watching with Season 3, since that was when I found out about the existence of the show.
Already having read most of the books, I felt confident that I could just jump in, and I was right.
But I wouldn't recommend that unless you already read the books.

So, hey! Did anyone enjoy the story arcs in Expanse Season 5, which finished a couple weeks ago? Personally I still thought this is the best sci-fi show on television in a long while. Everything about it is top notch.

Maskripper will be happy to know that there was more oxygen peril for three episodes at the end with Naomi Nagata's character as she tries to survive on a spaceship that has been rigged as a bomb, and then has to endure in a spacesuit with no extra air packs. It was good stuff - in fact, they almost overdid it.

There was also some interesting work with Clarissa Mao character, who had implants which allowed her to become superstrong for short periods of time, so she had the power to go "berserk" and kill some enemies. I wish they had showed more of that!

Anyway, the adventure will continue with the threat of both Marco Inaros and the Laconians in Season 6, which looks like it will be the final season under the original name of The Expanse (though it's possible they might do another series later on).

Sorry, Mr. X, really not sure how all that works in the end. With all of the vaunted close attention being paid to science which makes The Expanse more "hard sci-fi" than almost any other TV show of its ilk, there are still things like the gates and the protomolecule which are basically Magic in the Arthur C. Clarke sense.
Website: http://www.heroineburgh.com
Youtube: https://www.youtube.com/channel/UCsaJNs ... h5aTsjnGxQ
Twitter: https://twitter.com/Heroineburgh1
Facebook: https://www.facebook.com/heroineburgh/
DeviantArt: https://www.deviantart.com/heroineburgh
Top

I just finished this season. A wonderful, awful series of television.