Interesting news. As a huge fan of the pre-writer walkout/no marriage allowed Batwoman series, I hope this does well, but I'm not sure. Apparently she'll be in an Arrow crossover and then get her own series. The only thing that worries me somewhat is the network has said Kate Kane will be a SJW...which honestly to me does not fit her character at all and nothing makes me less interested than when these companies mess with a characters overall traits. I really hope they don't try to use her as a political lightning rod. To me Kate was always someone inspired by Batman to be a hero and she became a badass that took on the criminal elements that weren't really delved into in Batman's world. She was a strong and independent character that didn't need the entire Bat Family to help her every 15 minutes and her adventures were really exciting. I hope that's what the show turns out to be, not "character of the week" team up like Supergirl turned into. I also hope Kate is allowed to be a capable hero in the show. One of the biggest turn offs for me with Supergirl is just how un-super she is, pretty much every episode sees her getting her butt kicked by bush league villains and then getting bailed out by her tech friends to win. Hopefully Batwoman ignores this formula.

The funny thing though is just how outraged the internet and twitter seem to be about this show getting a chance. Was looking at some stuff on twitter and its amazing how scared people are of a lesbian character and also just how stupid people are trying to turn it into a political thing. Saw a lot of people saying this was some plan by the left to shove lesbianism in our face, and that CW was "turning Batgirl gay." It's amazing how many people are clueless that Kate has been a badass lesbian super heroine for a long time. SMH.
Top

If this show is indeed made, I would hope it deals with Batwoman’s sexuality like Val Kimer’s character in “Kiss Kiss Bang Bang”. In other words, it’s just her sexuality and isn’t the defining characteristic of her character.
Top

The most recent version we have seen in the animated movies is a violent vigilante and she even uses a gun.
Top

I just hope she is hot, stays a lipstick lesbian and wears the same costume!
Top

I just hope she is hot, stays a lipstick lesbian and wears the same costume!

Ditto. I think I might have said this before, but if Madelaine Petsch got the role and could keep up with the physicality to play it, that would be awesome, especially since she looks a lot like Kendra James!
Website: http://www.heroineburgh.com
Youtube: https://www.youtube.com/channel/UCsaJNs ... h5aTsjnGxQ
Twitter: https://twitter.com/Heroineburgh1
Facebook: https://www.facebook.com/heroineburgh/
DeviantArt: https://www.deviantart.com/heroineburgh
Top 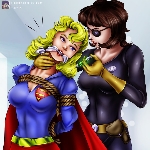 Hmmm, I've never had a clear picture of what one of my story villains looks like but Madelaine Petsch really fits with what I need!
My avatar courtesy of sleepy-comics.deviantart.com

Posts: 4625
Joined: 9 years ago
Location: Land of No Hope and Past Glories

Kendra for the win! I am here to help one and all enjoy this site, so if you have any questions or feel you are being trolled please contact me (Hit the 'CONTACT' little speech bubble below my Avatar).
Top
7 posts • Page 1 of 1