This is the continuation of the storyline that began in “Teen Bat 5: New Kid In Town”, where Teen Bat was defeated.

Teen Bat has gone missing, so her mentor (in sexy civilian clothes) heads out to track her down, but her search is interrupted by a Collector. He attacks and chloroforms her into unconsciousness. He seems to know that she was the heroine known as Night Warrior, who has since retired from the heroine game undefeated. While she’s unconscious, the Collector dresses her in her Night Warrior costume (off screen) and decides to collect her instead of Teen Bat for his employers. When she awakens, he announces her fate, but she doesn’t accept it, giving him a beating as he tries to subdue the costumed heroine. Night Warrior dominates the fight initially, but the Collector begins to wear her down.

Don’t miss this introduction of a new character to the Darkwing family… Night Warrior, a reluctant, but sassy and experienced heroine!

Check out the Element Poster to see exactly what is in each version.

Here are the purchase links: 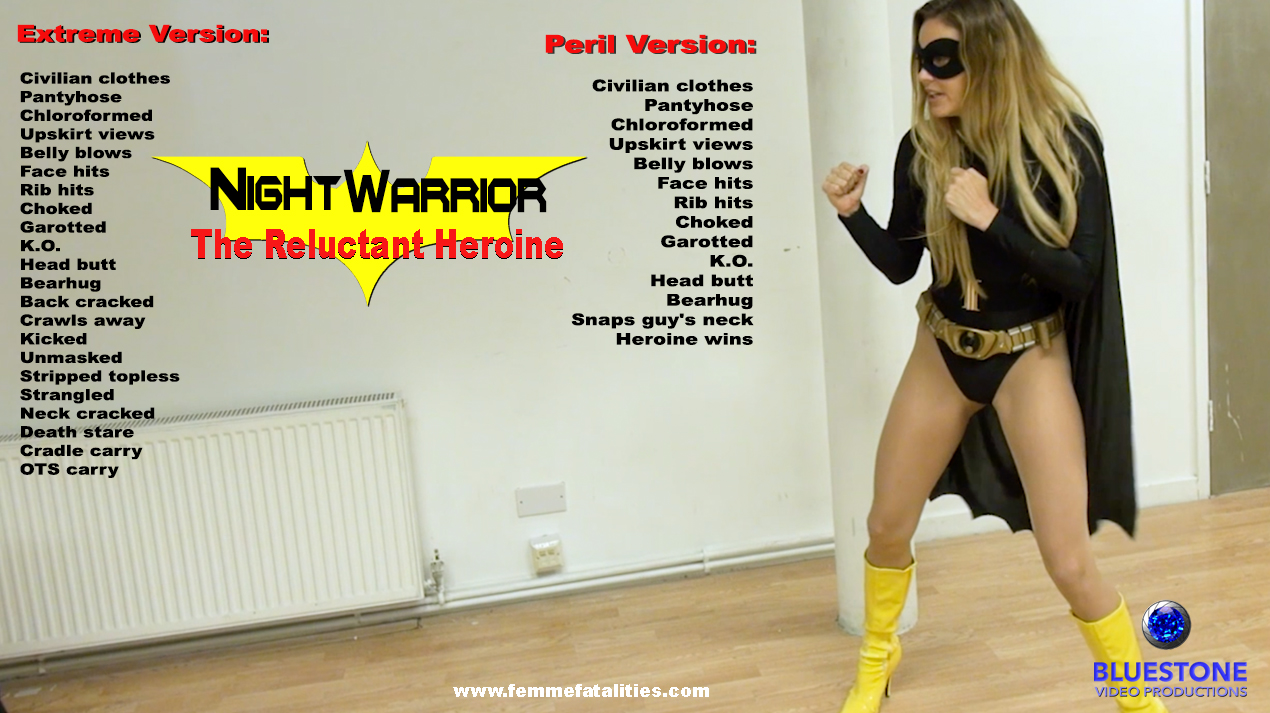 Here’s a gallery of some of the awesome scenes from this video!

Written by Bluestone
Bluestone Video Productions has been in the film-making business for 11 years, but entered the Superheroine world about 4 years ago with the classic "Wondra: Fall of a Heroine"! Building on the popularity of this video, we created many more Bluestone heroines, including Supernova, Darkwing, Catwarrior and Blackbird. Season 1 introduced our characters. Season 2 brought them all together in the "Dark Wondra Saga", and we hope Season 3 will take these characters to even greater heights. We are always asking what fans want to see and are eager to please everyone. Most of our productions also have alternate endings in order to satisfy those who just want to see Peril as well as those who want to see Extreme endings. Our best quality production values are reserved for our Superheroine line of videos!
What did you think?
00
Previous Article“Supernova 27: Unbreakable” is Released!Next ArticleArachna – Bringing The Adventure, Sexy, and Peril Back to Comics