Karen Beecher might seem like an unassuming scientist, but as the superheroine Bumblebee she packs quite the sting! Bumblebee has proven just as useful using her mind at S.T.A.R. Labs as she is using her super powers alongside the Teen Titans and the Doom Patrol. In honor of Black History Month — and the fact that Bumblebee is just awesome — let’s look at the history of the DC Universe’s first African-American superheroine…

Readers first met Karen Beecher in 1976’s Teen Titans #45 (written by Bob Rozakis and penciled by Irv Novick). Karen was the girlfriend of Mal Duncan, an underappreciated member of the Teen Titans. Mal felt that his teammates were taking him for granted, and he constantly vented about it to his girlfriend Karen. During one of their phone calls, Karen stated, “Anybody can be a Teen Titan if he really wants to be” — a statement that would soon have a deeper meaning for her.

By Teen Titans #47 (written by Bob Rozakis and penciled by Bob Brown), Mal had calmed down and was now singing the praises of the Teen Titans to Karen. Mal had taken up the new identity Hornblower and felt that his teammates had finally accepted him. Karen was seen quietly sewing a costume… 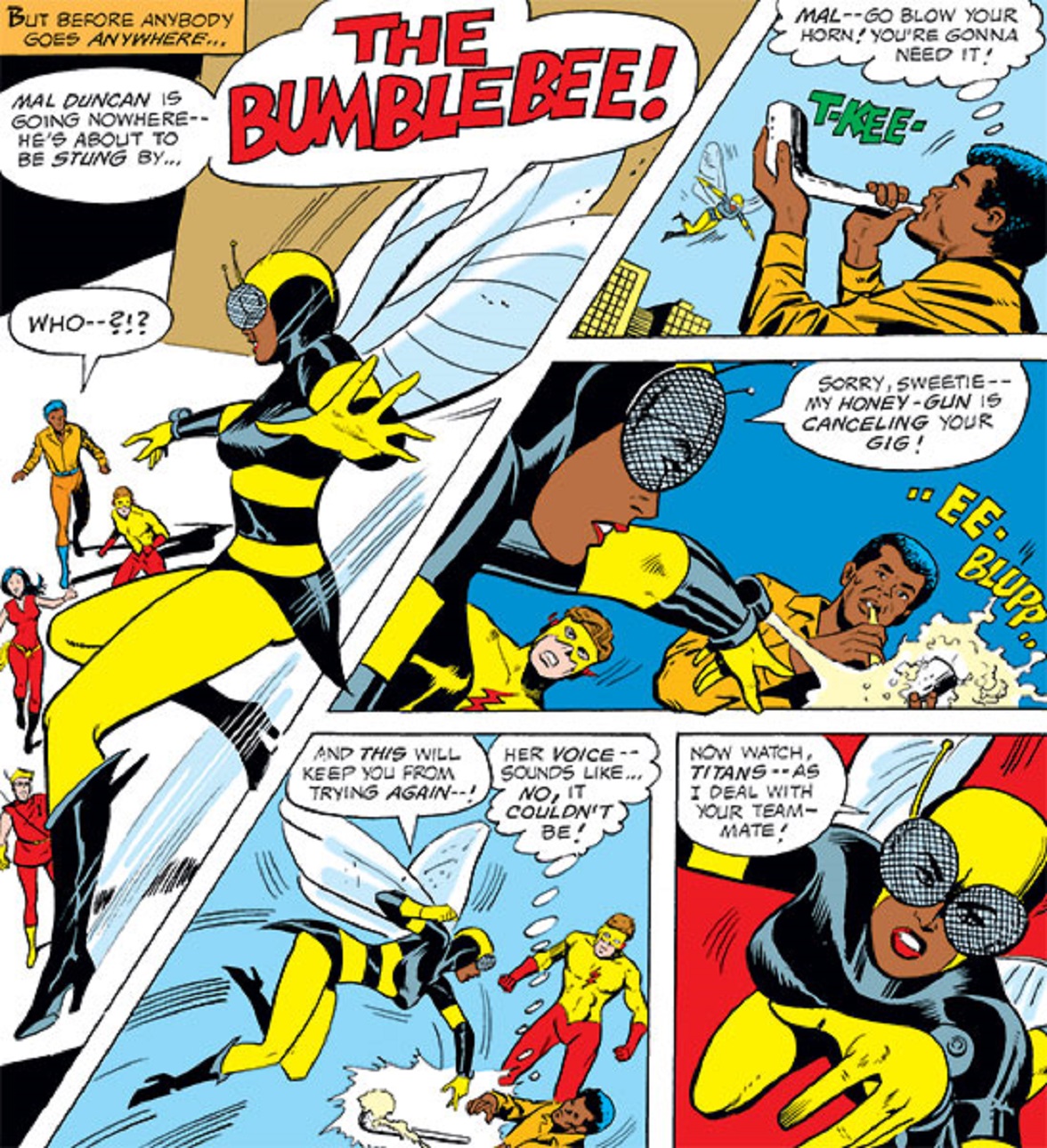 Karen finally made her move in Teen Titans #48 (written by Bob Rozakis and penciled by Jose Delbo). Donning a Bumblebee costume, she attacked her boyfriend in front of his teammates. Her suit gave her the power of flight, and its exoskeleton granted her super-strength. The Bumblebee suit also had an array of weapons, including sonic disruptors, with which she “stung” the Teen Titans. The Bumblebee returned in Teen Titans #49 (written by Bob Rozakis and penciled by Jose Delbo), but this time she assisted the team. Her boyfriend Mal had opened a new discotheque called Gabriel’s Horn, which was soon attacked by the Rocket Rollers. Mal recognized Karen under the mask and asked her to come clean. Karen revealed that she thought the Teen Titans didn’t care about Mal, so she’d built the Bumblebee costume to prove it. Her plan was to attack Mal as the Bumblebee, hoping it would open his eyes to how little his teammates regarded him. But when the Titans fought to protect her boyfriend, she realized she was wrong.

Impressed with her abilities, the Teen Titans invited her to become a member; and she accepted. Her time on the team brought her and Mal (who now called himself the Guardian again) closer together. By the time the group broke up in Teen Titans #53 (written by Bob Rozakis and penciled by Juan Ortiz), they were engaged to be married.

When Jimmy Olsen caught up with Karen and Mal in Superman Family #191 (written by Tom Defalco and penciled by Kurt Schaffenberger), the two were considering a move to New York City to continue their superhero careers. Mal and Karen helped Jimmy and the Newsboy Legion take down the Flamesplasher Twins, and again pondered their future.

Karen and Mal were next seen attending Donna Troy’s wedding in Tales of the Teen Titans #50 (written by Marv Wolfman and penciled by George Perez). Mal and Karen had gotten married since their former teammates had last seen them and had retired from superhero life.

Karen pursued a career in science, and in New Titans #56 (written by Marv Wolfman and George Perez, penciled by Mark Bright), it was revealed that she had been hired by S.T.A.R. Labs San Francisco branch. One of Karen’s co-workers was Dr. Sarah Charles, girlfriend of the Teen Titan Cyborg. Karen briefly became the Bumblebee again to help the Titans fight against the Wildebeest society. This move made Mal nervous, since he was afraid his wife would permanently become a superheroine once more.

The reality-altering events of 1985’s Crisis on Infinite Earths changed Mal and Karen’s history. It was now stated that they had briefly joined Titans West after the original Teen Titans disbanded. Titans West had a brief reunion adventure in Hawk and Dove Annual #1 (written by Karl Kesel and Barbara Kesel, penciled by Dave Hoover and Tom Artis), and Flamebird was so excited she tried to reform the team on a more permanent basis. But Karen ultimately declined.

Despite her attempts to retire, Karen found herself again thrown into the superhero life against her will. First, when the Wildebeast Society captured her and Mal in 1990’s “Titans Hunt” storyline, and then when she was relocated to Seattle to help train a group of young heroes in Team Titans #22.

Karen and Mal were forced out of retirement again when Victor Stone (infected by the alien Technis) gathered every former Teen Titan in stasis pods on the moon. After the adventure was over, Mal was hoping that he and his wife would be invited to the newest group of Titans, but Karen insisted that their superhero days were behind them.

Months later, they were invited to rejoin a Titans team, but not the one Mal had been expecting. Beast Boy and Flamebird were attempting to put together a new Titans West team, which was being rebranded as Titans L.A. Karen and Mal apprehensively checked it out, but the group was disorganized and never truly got off the ground. Deciding that her superheroine life wasn’t over yet, Bumblebee occasionally assisted the Birds of Prey and the Teen Titans during this period. 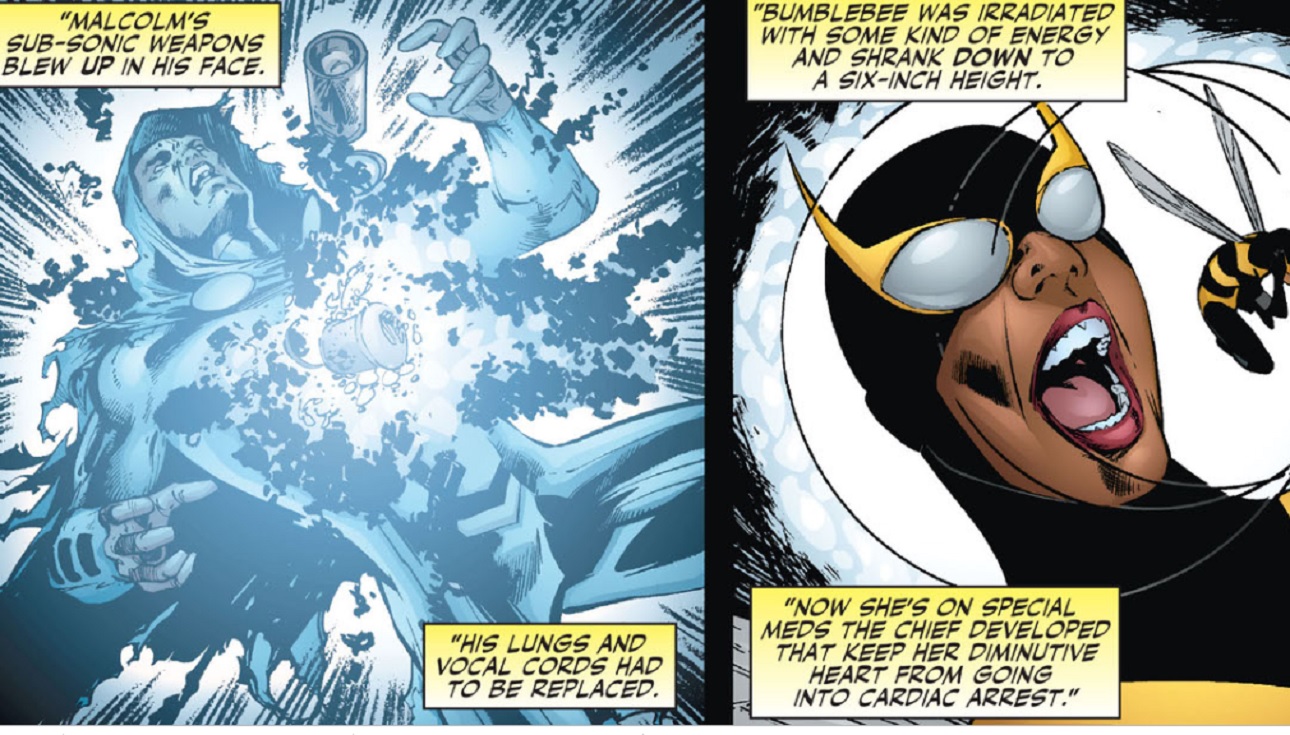 When the universe was in danger in the 2005 mega-event Infinite Crisis, Bumblebee and Herald (Mal’s codename at the time) joined a group of heroes for a massive battle in outer space. During the skirmish, a stray Zeta Beam ray hit the couple and altered their bodies. Mal’s sound weapons became fused with him and he lost the power to speak, while Karen was shrunk down to six inches.

In Teen Titans #36 (written by Geoff Johns and penciled by Tony Daniel), it was revealed that Dr. Niles Caulder had taken the couple in to help them with their new conditions. Niles gave Karen treatments to prevent her tiny heart from going into cardiac arrest and worked on restoring her to her original size. Mal and Karen joined the Doom Patrol, where they reunited with their former Teen Titan teammate Beast Boy.

These changes proved to be too much for Karen and Mal, and the couple grew apart until they separated. Mal left the Doom Patrol, and Karen moved in with her teammate Elasti-Woman. Elasti-Woman kept a dollhouse in her home so Karen could have normal-sized furniture in her diminutive state. The friendship proved mutally beneficial, since Elasti-Woman was also separating from her husband at the time. Karen grew to miss Mal, and reached out to him a few times, giving hope that things weren’t quite over between them. 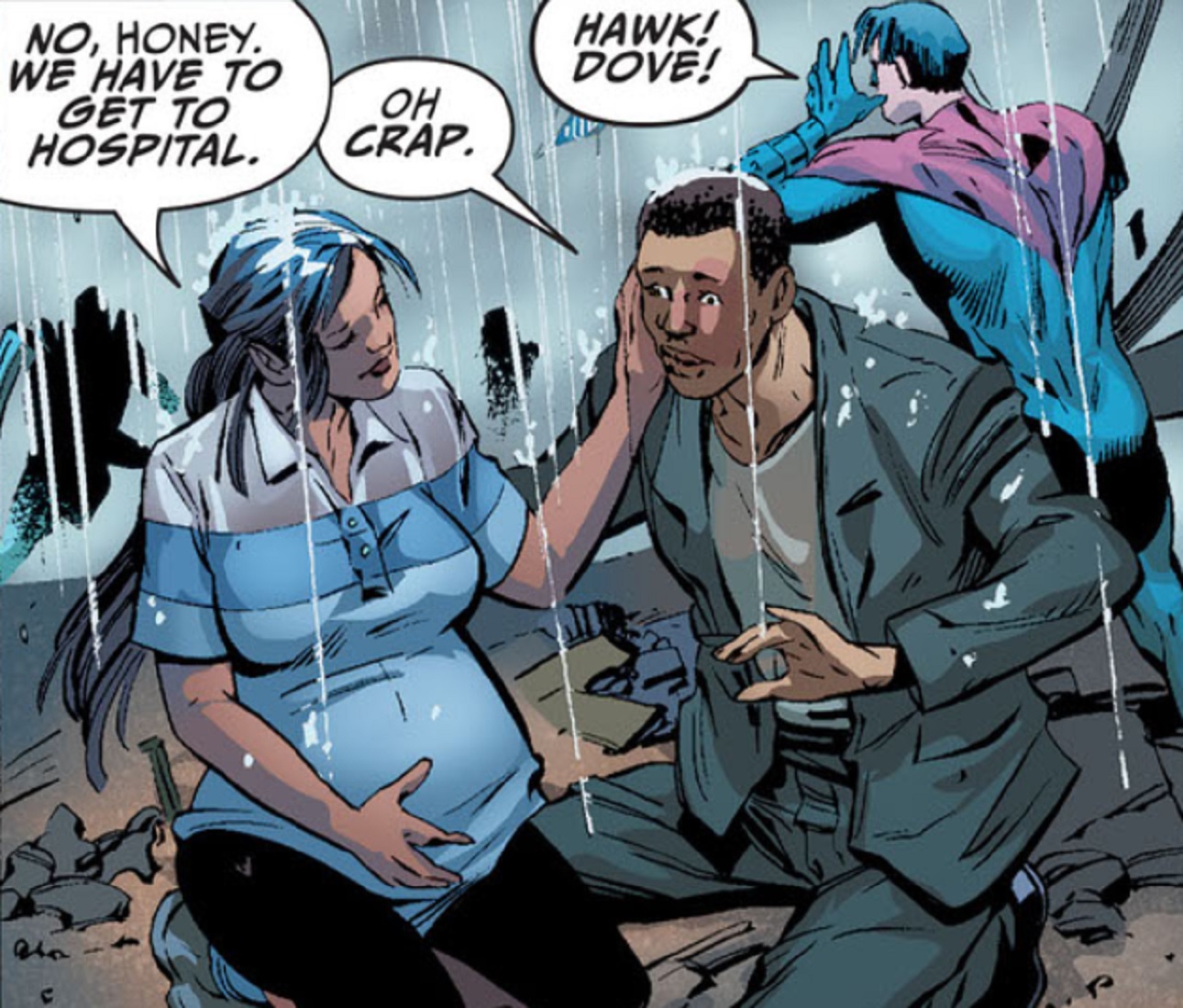 After the reality-altering events of 2011’s Flashpoint, Karen returned to normal size and her history as Bumblebee was erased. During the 2015 limited series Titans Hunt, Karen and Mal were shown as a married couple with a baby on the way. It was revealed that Mal was a former Teen Titan, who’d forgotten his time as a superhero thanks to the machinations of Mr. Twister. When Mr. Twister attacked the former Titans, Karen found that she had the ability to shoot hot beams of energy from her hands. Once Mr. Twister was defeated, Karen gave birth to a baby girl.

Karen was curious about her powers and wasn’t sure if they were a blessing or a curse. She visited a research center that was secretly run by the Fearsome Five, where she was supplied with an exoskeleton super-suit to help her control her abilities. After the Titans helped her escape the Fearsome Five’s grasp, she joined the team as Bumblebee. After operating with the Titans for a few months, the time demands of crime-fighting proved too much for Karen. When the team was in the process of dissolving, Karen chose to retire so she could spend time with her husband and daughter. 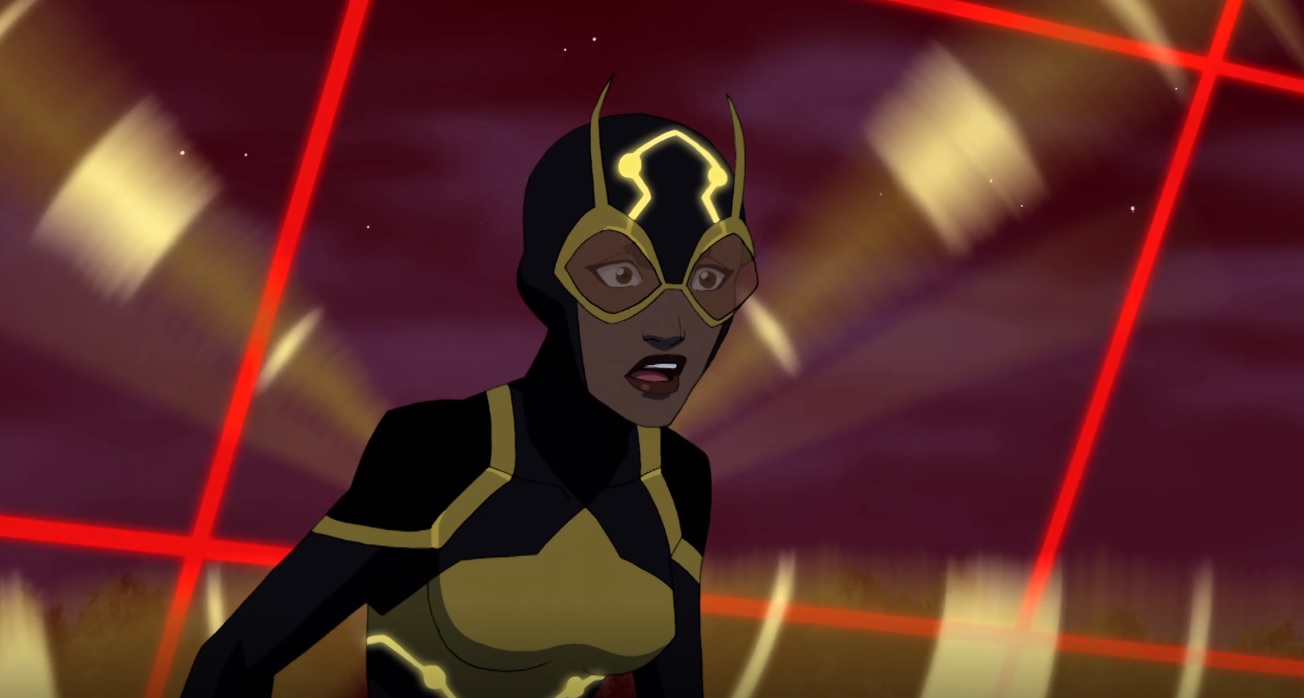 Bumblebee (voiced by T’Keyah Crystal Keymah) made her screen debut in the Teen Titans episode “Deception”. In this series, Karen’s powers came from her own biology instead of her supersuit. She made a few appearances, helping the Teen Titans take down H.I.V.E. and Brother Blood.

Karen Beecher (voiced by Masasa Moyo) is a regular character in Young Justice, and debuted in the episode “Targets”. Her school’s mascot is the bumblebee, which inspired her Halloween costume in the episode “Secrets”. By the episode “Happy New Year”, Karen had adopted the Bumblebee identity and was a full-fledged member of the team. Currently she’s taken a break from superheroics due to her pregnancy.

Karen Beecher has also been seen in the animated film Justice League: Gods and Monsters. In this film, she’s a scientist who is brutally killed by the Metal Men. Bumblebee was featured as a member of the Teen Titans in the flashback introduction for Teen Titans: The Judas Contract. Karen can occasionally be seen in the Cartoon Network series Teen Titans Go! and cameoed in its recent spin-off film Teen Titans Go! To the Movies.

Although she initially became Bumblebee just to fool her boyfriend, Karen Beecher’s life as a superheroine has left a significant mark on the DC Universe. She’s not only DC’s first African-American superheroine, but a brilliant scientist, a skilled inventor, a mother, a Teen Titan, and an inspiration to readers everywhere. Long may she sting!

UltraGirl In The Clutches of The Black Cat! pt 2